The most important thing I learned a few years ago was that the market was a wave.

Well, not the market, but the charts that we look at. It always moves in waves. Someone actually named them after themselves but we don’t really need that lovely name (Elliott Wave). Because we don’t need to complicate things.

When I talk about waves, I don’t mean the popular Elliott Wave. I mean the AIMS WAVE.

What does that mean?
So, we have one of the most beautiful indicator we call AIMS The Wave. But you should know that it has many other names such as The AO, The Awesome Oscillator, The eWave, AIMS Wave etc.
This simple concept revolutionized the complicated concept of The Elliott Wave into a Simple 10 Seconds to Elliott Wave concept.

For us technical traders, we don’t have an up and down as such specially in forex. All we see is eWave turning Red or Green.


Assuming you already know a bit about the wave. I know most of you will want to know the answer to this fantastic question.

The Big Question is: How to trade the third wave?

So when you begging to understand the Wave Concept you soon realise that the Gem of this Treasure is the Wave 3. This is the biggest most powerful wave. And the next logical step for most trades is to ask this next consequential question.

The answer is disappointing to some but in reality, it’s very interesting. So the answer is that

Lets first ask, Why is this a question? Why do we ask this question?

The question is raised because we see these beautiful often elusive wave 3’s. And we want to GET IN into those waves to make the most amount of profit. We all want to catch that BIG TRADE.

Because we know that the market moves, roughly in 5 waves. Well, not really but it’s a great lie that really works. trust me.
What we all agree on is that the third wave is always the biggest strongest waves. And it is always wave 1 and wave 2 that leads to wave 3.

And that is why you want to know where is wave 1-2.

So is there a way to do that?

Wave 1  2 often occurs during the Sideways market or at the peak of terminating waves. Both spots are very risky and difficult to spot and catch.

We have an easier BETTER more profitable and Powerful way to trade The Illusive WAVE 3.

How to NOT Trade Wave 3 yet trade it at the same time.

Yes, We don’t trade wave 3, yet we do trade it. Paradoxical? You bet it is.

But the answer is very simple and exciting.
So, we trade Wave 5 and within that, we catch wave 3.  That is because Wave 5 is an impulse wave. And within each impulse wave, there is ALWAYs a wave 3 of a certain degree.
Step 1: The way to do that is simply let the Big Wave 3 happen.
Step 2: Let it turn into wave 4 and then
Step 3: Now that you know wave 4, position yourself and trade into wave 5.
We use a trading pattern that we lovingly call AIMS The Setup One.
Using Setup 1 you will always get into wave 3 of Wave 5. So you’ll be trading Wave 3 but within wave 5.

This is a very high profitability strategy. It will give you a win rate of 70%


When you spot 3 and 4  you’re able to make sense where “was” wave 1 and 2. It’s not confirmed until you see a 3 and 4. So going into a new 3 is difficult unless you do a bit more work. And we don’t like more work. We like things simple.

Here are some examples  of the Perfect Setup 1 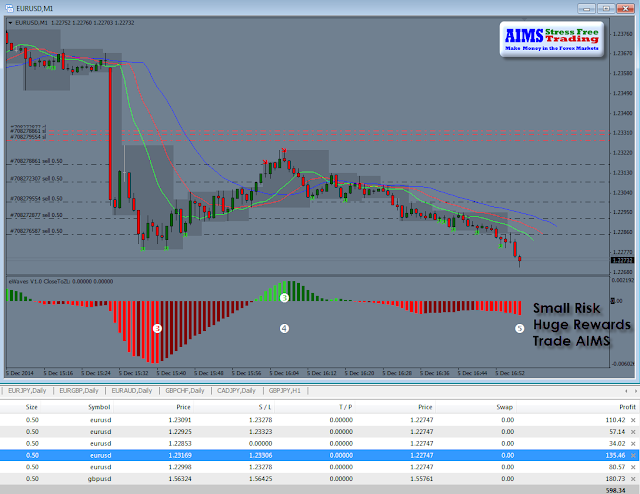