The Most Important thing I’ve learnt in life , relating to
trading, is that we should risk far less than 1% per trade. Yes, that is what
we are told in most of the trading books to risk 1-3%. Even though a very small
proportion of the trading books talk about this very important aspect of
trading i.e RISK Management in the first place.  But what they don’t consider is what happens
if you have 10 losing trades in a row?
The Biggest Secret of Trading Success is: RISK MANAGEMENT.
And risk management has a lot to do with this often-ignored
concept called Drawdowns. A good method should always address Risk and draw
downs.
According to Investopedia


What is a ‘Drawdown’A drawdown is the peak-to-trough decline during a specific
recorded period of an investment, fund or commodity security. A drawdown is
usually quoted as the percentage between the peak and the subsequent trough.
Those tracking the entity measure from the time a retrenchment begins to when
it reaches a new high. (ref) 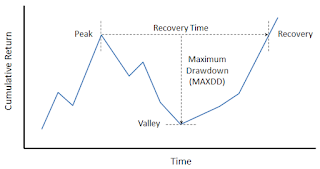 Some people mistakenly think drawn down begins when your
account balance drops below its start point. E.g. if you start with $10,000 and
it drops below the 10K is when drawdowns start. I did not know until now that
there are so many people who think its that way. Oh no.
We need to understand that no matter what strategy of
trading you apply, drawdowns will occur. Drawdowns are REAL. They happen, they
will happen, and nobody can stop them from happening.

Because it’s part of the
whole game. The game of probabilities. Every now and then you will experience a
batch (the T20 Principle) where you get 10 rents or more. Without a solid plan,
without knowing about it in advance, it could happen and what most people would
do is to abandon the plan. If your plan does not cater for this, your plan will
be considered an incomplete or ineffective plan. So we must plan but not just
plan, we must plan accurately, efficiently and effectively.

I learned that there are two factors, which when combined keep
those damn 95% of traders below the zero line of their equity graph.

The above could usually be the result of NO PLAN…
When there is no plan, and there are drawdowns, there really
is nothing for a trader to think  but to
RUN as fast as they can. The path of least resistance is to STOP doing what
they are doing. In all honesty It’s actually a good rational response to stop
doing it because it hurts.
The problem however is that if you stop what do you do next?
The usual answer is, look for a new method. There “the demon Dr.
Draw” will drag them down again and so the yo yo (AO) continues and so
does the hopping mechanism. Until finally someone tells you about AIMS
(ahem);…

T20 Principle keeps
you grounded. It helps you with staying disciplined. However, what it can’t
stop is the probability of those major drawdown periods. But it does teach you
about it. T20 principle deals with both the discipline of trading and probabilistic
mindset. It’s a one shot medicine that cures all the trading diseases there
are.

This is the main
issue. So, what must we do?

The answer is simple. If you are uncomfortable with
the drawdowns, e.g. risking 1% per trade, 10 consecutive losers could mean nearly
10% drawdown. and if your plan is to NEVER experience a drawdown more than 5%
the simple way to achieve this is to use (no , you don’t need to change entry method)
Risk Manipulation.
If 10% draw-down is too big, and it is big simply lower your
risk per trade. That is What makes winners consistently winners. And so here
comes the example of Fruit method again. This method trades aggressively, but
with very conservative risk management. We enter market only with Quarter risk,
adding on the rest of 3 quarters in next 2-3 add-on trades.
This way, you can keep drawdowns relatively low, within
acceptable margins. If you still experience drawdown of more than 3-5% then
perhaps lower the risk per trade to 0.75% or even 0.5% and then scale in to
positions. Keep in mind if you score less than 70% on your discipline then the
first thing to deal with is to get that figure to above 70%.
This can be done with setup 1 as well. In setup 1, what we
can do is to make entries  just the way
we do, but simply take half off at 1:1 and let the rest be trailed with a box.
This will reduce our over profitability a tiny bit but massively reduce drawdowns
and keep it within acceptable ranges. e.g. if you risk 0.5% per campaign, it
would  take more than 10 trades to
draw-down 5%. and before you know it you will hitting the win streaks again and
back in the zone.
All the best my fellow traders and AIMSters
AIMS Stress Free Trading – http://www.iTradeAIMS.com